If you’re planning to travel to Romania in spring, chances are that your visit will coincide with Easter or pre-Easter time. So we thought a bit of information about Great Lent & Romanian Pre-Easter Traditions and Rituals might come in handy.

As many of you probably know by now, Romania is a country where Eastern Orthodox roots run deep and run wild (as the song says) and this is partially what makes Romania Romania.

According to statistics, censuses and other top-10-most-religious-country lists, Romania is one of the most, if not THE most, religious country in Europe. It sounds intriguing and imagination-stirring to say the least. On reading that you may expect to see bearded-men and nunlike women roam the streets of the cities while assiduous priests run around sprinkling holy water on anyone who looks like they might have lost their faith. Well, rest assured that this is as true as the vampires that took over Transylvania centuries ago and decided to stay.( >>More about that here<<) 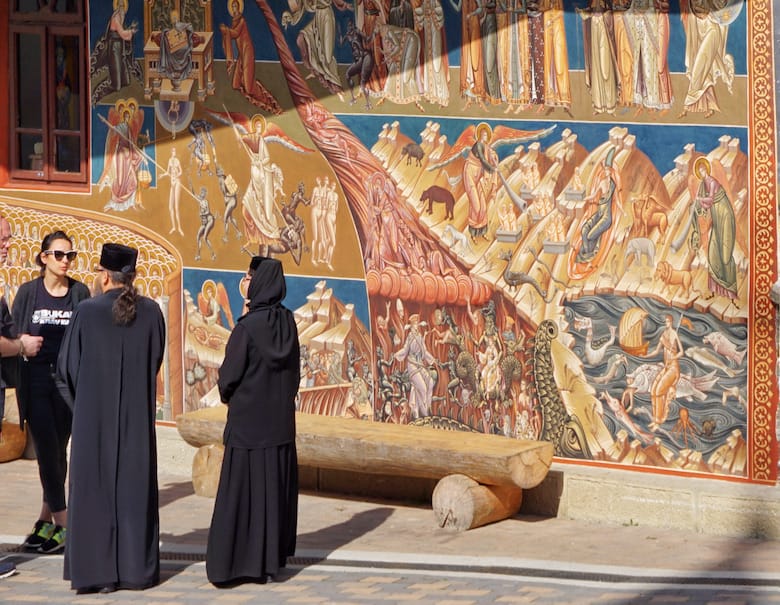 If Wikipedia is right, at the 2011 census, 92% of Romania’s population identified itself as Christian, 81% of which being Eastern Orthodox Church while the rest constituting a mix of Catholic Church, Calvinism, and Pentecostal denominations. So, yes, Romanians are mainly Greek Orthodox, but let’s not forget that Romania is a secular country with no state religion. That makes faith something very private and submitted to free will.

Now let’s suppose you preferred the first scenario, being chased by zealous monks with a holy cross in view of a quick and painless exorcism. You need not worry then, because, while you may not find yourself in such circumstances, you can still encounter enough bits and pieces of Romania’s Greek Orthodox rituals and traditions during your stay, to stir your imagination and make you want to come back for more. What can we say, it’s kind of addictive!

And because this is an article about Great Lent & Romanian pre-Easter traditions and rituals, let’s stick to the point and see what is there to know about these main suspects.

Out of the four extended fasting periods (Great Lent, The Nativity Fast, The Apostles’ Fast and The Dormition Fast), Great Lent is….well, the greatest but also the strictest. The lent lasts for seven weeks and fish is only permitted twice: on Palm Sunday (the last Sunday before Easter) as well as the Annunciation (on March 25th). In some regions of the country caviar is also permitted on Lazarus Saturday! In lack of caviar any fish eggs will do :).

Like any marathon, Great Lent needs prior preparation and that is exactly what the Meatfare Sunday and Cheesefare week are expected to do. The Meetfare Sunday or the Judgement Sunday is the second Sunday before Great Lent. It is called Meatfare because it is the last day to eat meat before Lent. With no hamburgers in sight, one can now focus more on dairy and fish for another week until Forgiveness Sunday will put an end to that, too and plunge everybody in a seven week of vegan bliss! That’s right, from now on, Romania becomes a vegan paradise!

During the next 48 days, consumption of red meat, other animal products (cheese, milk, eggs) and fish or seafood is strictly prohibited for practising Orthodox. Even olive oil and wine are looked at suspiciously and served only on special occasions.

Meat lovers don’t cancel your plans to visit Romania during Lent though! As mentioned above, Romania is a secular country and no religious rituals and traditions are imposed by law. So, restaurants will carry on with their regular menus, adding some vegan options as a bonus! But, if you ever flirted with the idea of taking a break from animal products, this is the best time to try it!

What will one find on the Lenten menus? Well, a cornucopia of plant-based specialities and below are just a few: 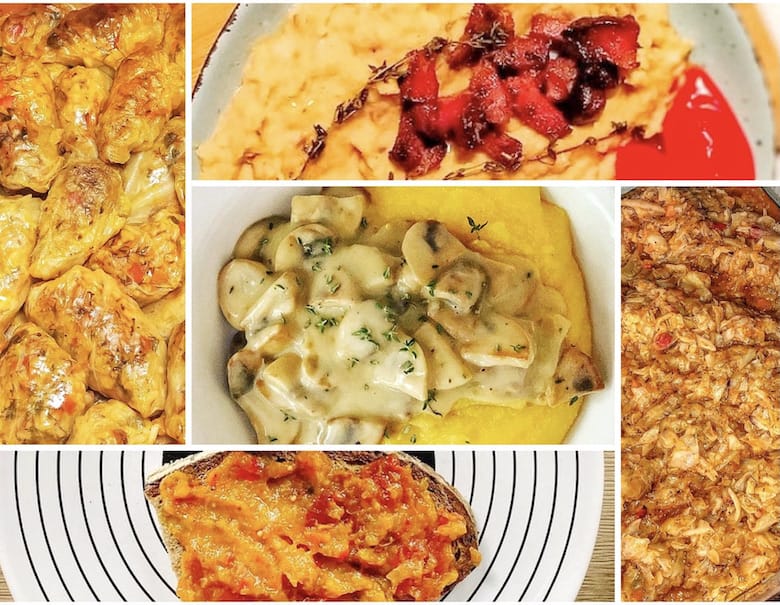 The rationale behind this strict fasting period is cleansing both body and spirit, in preparation for the grand finale, the Easter Day. As healthy and tempting as it may sound, many Romanians will only refrain from animal products on Clean Monday (the first day of Lent) and during Holy Week, leaving the full fast to the most devout amongst them.

>> Click here to find out more about Romanian food <<

Now that we “cleared” this out, a few traditions and rituals are in order.

In Romania, there are countless traditions and rituals before and during Great Lent. They stretch for two weeks starting on Meatfare Sunday (Judgement Sunday), when the New Agrarian Year (spring equinox) is celebrated.

Meatfare Sunday’s Eve is a celebration similar to the New Year’s Eve. The village people gather together in the open to rejoice and have fun. Fires are lit on the surrounding hills to purify the local community and chase away the bad spirits. In Maramures, the traditional “shout over the village” (“strigatul peste sat”) ends with the following lines: “Cele bune sa se-adune, cele rele sa se spele!” (“May the good pile up and the bad be washed away!”)

The week following Meatfare Sunday is called “The Fools’ Week” (Saptamana Nebunilor) because on these seven days only the fools of the village are looking to unite in holy matrimony, while the level-headed people have married in winter when weddings were permitted. A final, desperate attempt to find eternal happiness alongside one’s better half, obviously!

In Muntenia, the southern part of Romania, on Forgiveness Sunday or Cheesefare Day (Lasata Secului), godchildren visit their godparents bringing along food and drinks (also known as “plocon”) and then eating and partying until late into the night. On this occasion there is a fine ritual that kids simply adore (we surely did). It’s called “baterea alvitei” (“marshmallow fight”) and it goes like this: the godfather ties a piece of marshmallow with a rope, stands up on a chair and begins to balance it back and forth in front of the godchildren (kids and adults alike) who are on their knees, hands at their back. The challenge is to catch the marshmallow in motion without touching it with your hands. Needless to say how sticky everybody gets! The one who captures the pray is entitled to keep it and eat it, of course.

In the same region, there is another custom on Cheesefare Sunday. The daughters-in-law bake sweet-cheese and dry raisin pies for their mothers-in-law, hoping for a sweeter and stronger bond  during Lent. Wishful thinking!

“Santoader’s Horses Week” (Saptamana Caii lui Santoader) is the first week of Lent and it brings calm and balance after a week of celebrations, parties and feasts.

On Clean Monday, women prepare “borș” (a vegetable sour soup) that will never leave the table until Easter Day. Mind you, the method of preparation is not a random one, but enhanced with magic spells and enchantments to guarantee its purity and healing quality and a healthy transition from winter into spring. 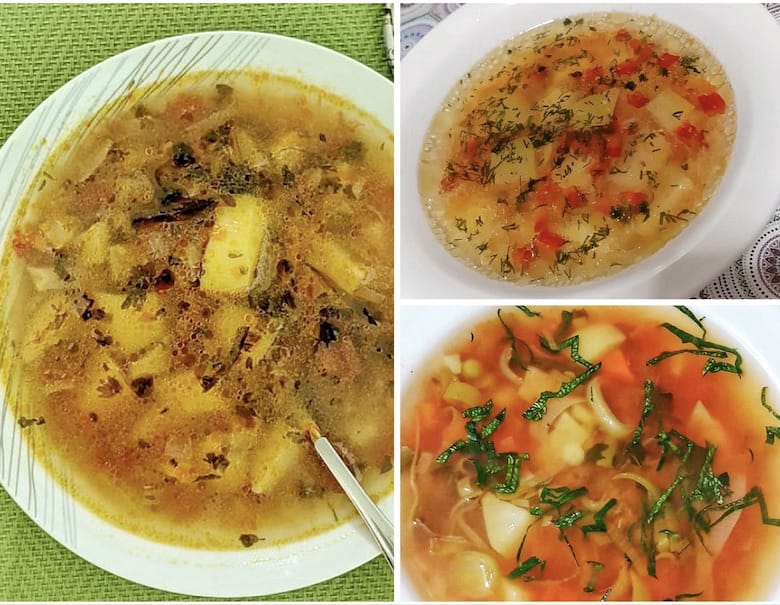 On Tuesday, all dishes in the house are washed with lye to be ready for the fasting food. The unmelted snow is collected, turned into water and used in beauty rituals or sprinkled on the floors when sweeping to cast spells and charms.

Crooked Wednesday is a celebration held, especially in Oltenia, for people’s health and especially for the prevention of paralysis.

On The Mare’s Thursday many activities and chores are banned to ensure the health of the animals around the house, particularly the horses’.

Santoader’s Friday, the first Friday after Cheesefare Sunday, is dedicated to one of Santoader’s Horses and is eagerly awaited by unmarried girls and young wives. Before sunrise, the girls go in the woods to search for horse-heal root used in traditional medicine, beauty rituals and against evil eye. It is said that washing your hair with the plant will make it healthier and stronger. Rapunzel, we know your secret now! 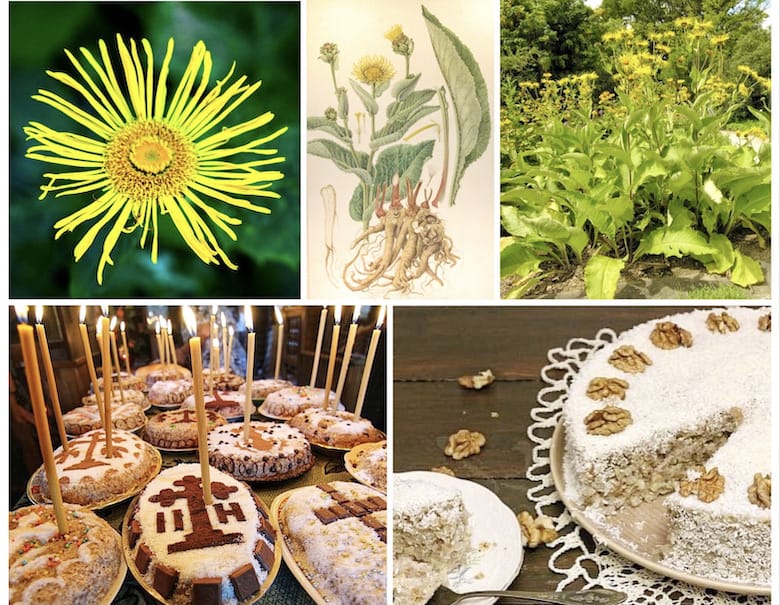 Santoader’s Saturday is said to belong to the most powerful and naughty of Santoader’s Horses. On this day, the villagers trim the manes and tails of the horses and they beautifully braid them. The bridles are adorned with colourful woollen tassels, red being the preferred colour.

Special dishes are prepared on the occasion. Wheat and corn grains are boiled and sweeten with honey. Wheat flour rolls, called Brandusa, are given as alms. Coliva (a traditional dessert offered by Romanians to commemorate the dead, made of whole wheat grains, nuts and sugar) is also prepared and taken to church and cemetery.

There are plenty of other rituals during the Lent that one will discover and appreciate if in Romania before Easter. Particularly beautiful are the religious ceremonies held the week before Easter. They are called “Denii” and it is believed that if one attends the services, makes a wish and ties a knot on a lace for each of the seven “Denii”, their wish will come true until next Easter.

We end our story on this wishful note, hoping that you’ll decide to book a flight to Romania before next Easter and join us on a voyage of discovery to these mythical and mystical lands we call our home.