Romanians speak food
Here’s a bite of our story

Abandon all diets you who come to Romania! Forget about intermittent fasting, say “So-long!” to your low-carb regimen and be prepared for Keto with a twist (yes, carbs being the twist). We’re about to hop on the most delicious all-you-can-read story that will reveal, through food, some of the most intimate, candid and hearty Romanian traditions with all the necessary spices.

Beware, though! We, Romanians, are notorious for our disregard to human-size portions. We are more likely to express our love through gargantuan food quantities piled up on a single, humble, tiny plate than by saying “I love you”. Maybe it’s a reminiscence from the days we spent lacking everything in communism, or maybe we’re just big on food. However, since our dishes are so delicious, rest assured you won’t mind.

Welcome to our humble abode!

While the city-bred Romanian has adhered to a more globalised welcoming ritual, countryside inhabitants still swear by a simpler and more genuine way of making guests feel at home. Bread and salt are the two humble tokens without which a warm-welcoming wouldn’t be considered warm.

Why bread and salt? Well, it goes back to the roots of the narrative that made Romanians, Romanians. Bread, because it’s made out of the grain the country’s womb loves to nurture. Salt, because it’s the ingredient that makes anything taste like something and because, long ago, it was a highly-precious commodity.

Sure, if you’re dead-hungry from the road, you might find the combination a little on the dull side. Where are the luscious dishes of pork you’ve been told about? Where is that cheese said to be delivered fresh by the shepherds themselves? Hush your hunger for a bit, those are probably spread on enormous platters and waiting for you in the other room. Until then, have a big chunk of bread, and you’ll begin to get a taste of our story and why we are masters of carbs.

Just another day working the Earth

Countryside Romanians are still very much in-tune with their land. More than a way of making a living, working the land is a spiritual endeavour. It gives meaning and answers the burdensome questions that pile up the invoices at the psychologist for the rest of the modern world.

Romanians tend to their land with the same love they tend to their kids and, sometimes, with the same harshness. In return, the land gives them everything they need. And, when working, they need food. Usually, with no McDonald’s around, Romanians have to bring their lunch from home. In a kitchen towel, they neatly pack tomatoes, goat cheese and “slăninuță” (pig’s fat) – everything homegrown and practically the definition of bio and organic. Add a few green onions to the combination, and you’ll open Heaven’s gates.

For countryside Romanians life is simple but, make no mistake, it’s not easy. 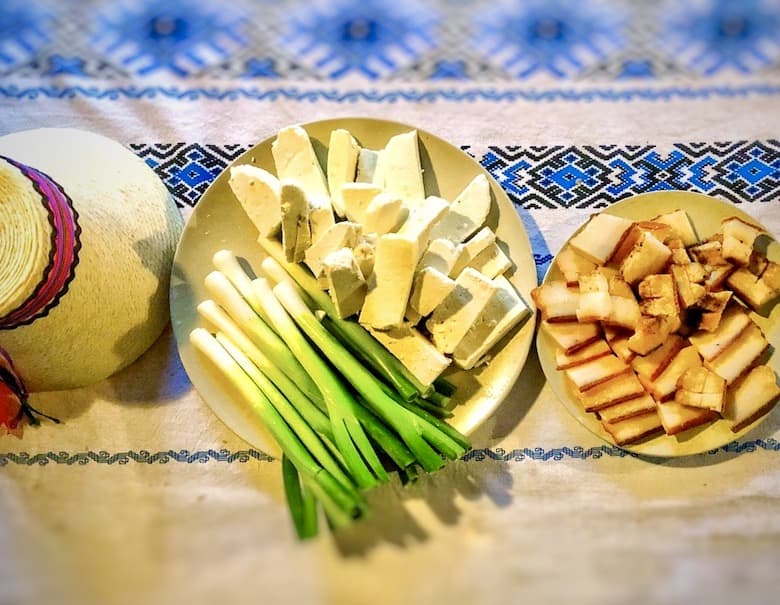 This is just how much grandma loves you

Traditional Romanian mothers are known for their uncanny ability (and responsibility) to keep the household in strict order (most of the time, actually, to prevent it from falling apart). For this, they have to say a lot of “No’s” to random queries of their kids. Otherwise, their already plump to-do list would burst into chaos .

Only when mothers upgrade to grandmothers they can show their soft side and say “yes” to miscellaneous and serendipitous requests. Most of these will always involve some form or another of carbs. Sweet, of course, and utterly-buttery. Among grandkids’ favourites are the infamous scovergi (fried dough).

With years of dough kneading under their belts, grandmas take this request very seriously. It’s their reason for being and yes, they’re going to make it a mighty great one! They knead in ways no human hands can, and fry the dough until the scovergi reach the impossibly perfect balance between soft and crisp. Then, while making sure no fried dough is snitched from under their noses by an inpatient “client”, grandmas dusts them in the magic powder of sugar. And love. 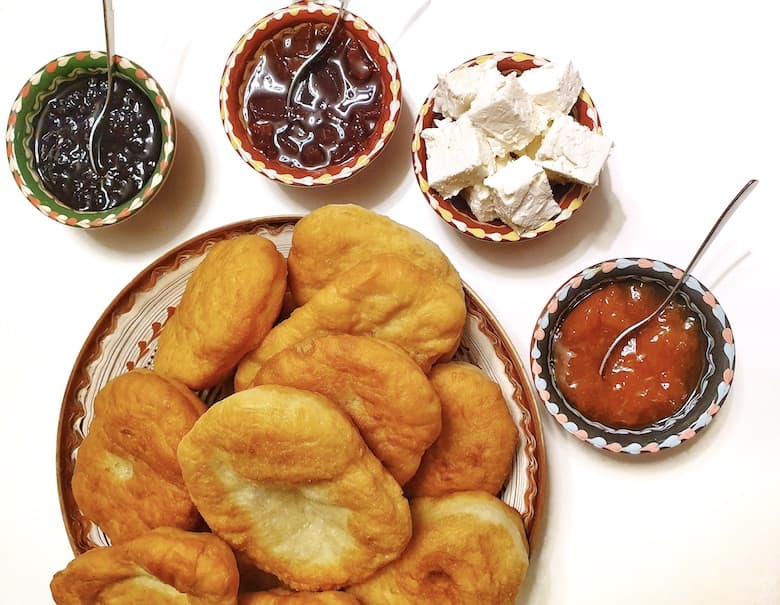 Have a place by the fire

If you’re at any level familiar with Romanian cuisine, you’ve certainly heard about mămăligă (polenta). You might even have a clue about our brânză de burduf (spicy cheese). But that doesn’t mean you’re properly prepared to get your hands all gooey by wolfing down a bulz. To be considered ready, you need to sit down by a sobă (a traditional Romanian fireplace) and hear the story of the bulz.

Bulz is the traditional Romanian equivalent of the modern grilled sandwich. If that’s a mind-twister, let us deconstruct it for you: a bulz is a decadent ball of spicy cheese enclosed in an unholy amount of polenta, all grilled over the fire. A melty sensation for all senses, that’s for sure, yet simple and filling. 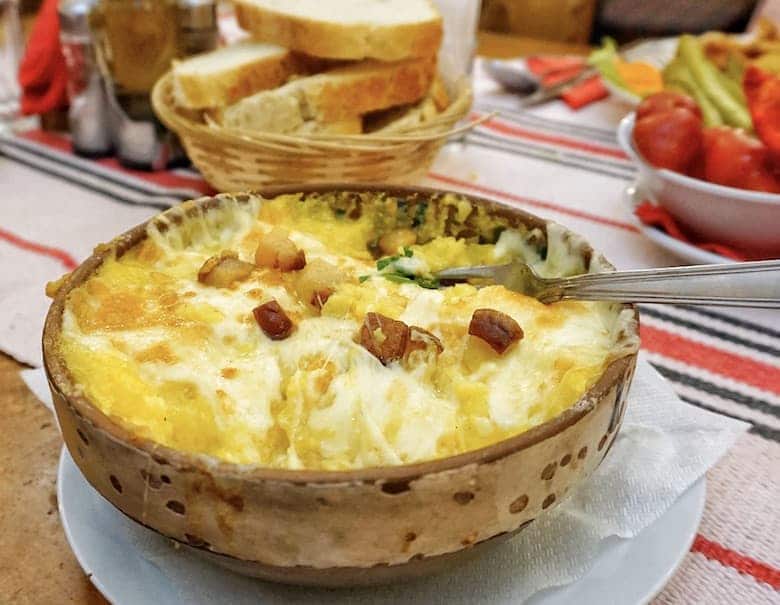 A token of goodbye

Word of caution: this next food has kind of a bad reputation. It might be a dessert, but its sweetness is usually a bad omen. Why? Well, because colivă is the traditional alms offered by Romanians when somebody dies. It’s made out of three simple ingredients: whole wheat grains, nuts and sugar. The lack of dairy is intentional, making it suitable even for religious fasts.

With such a somber introduction, you might not feel very eager to try it. But maybe you’d be more inclined to, since nowadays more and more people prepare it just for enjoyment. Its simplicity makes this dessert a real surprise. It comes to prove that the most humble ingredients can stand out through rich flavours. 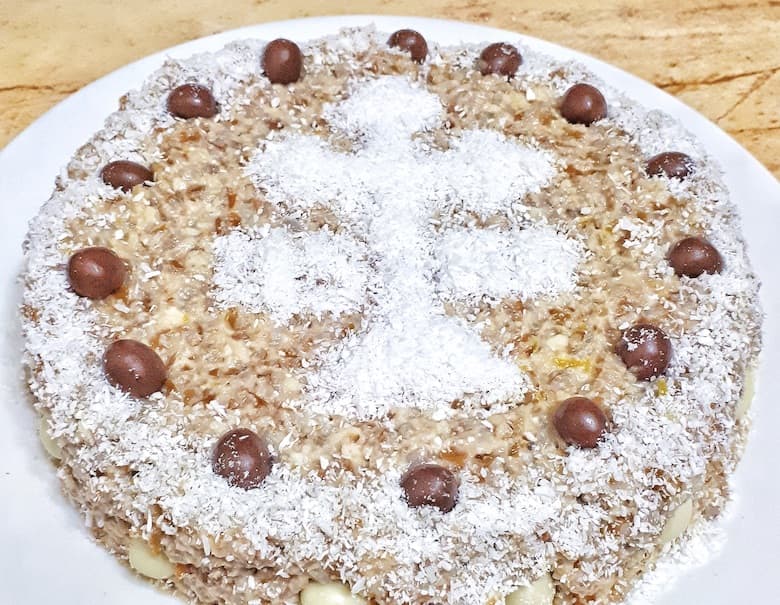 What’s ours is yours

If meat is not part of your diet, you’ll probably want to skip this bit. Romanians are, as a nation, huge meat lovers. Not only that, but they raise the animals themselves. Romanian husbandries usually include a few chicken, turkeys, ducks, cows and pigs. Sheep are customarily sent to sheepfolds and left in the care of shepherds who then regularly supply the owners with cheesy delights.

You’ll always find fresh eggs and cheese in the houses of hard-working, earnest Romanians. But, visit a Romanian near Christmas, and it will be all about pork meat. This is the period traditionally associated with the ritual of sacrificing the pig (as humanly as possible). To pay respects to the animal and to give thanks for the food, Romanians prepare a dish called  Pomana porcului (Honoring the Pig). This meal is shared with everybody who helped sacrifice the pig, but also with close relatives and guests.

The pig sacrifice is a deeply ritualistic tradition that spans over weeks. During this time, Romanians prepare the pig meat with artistry by transforming it into countless regional delicacies such as carne la garniță, tobă and caltaboș to name just a mere few. Usually, a big part of the meat is home-smoked and saved to be consumed through-out the year. 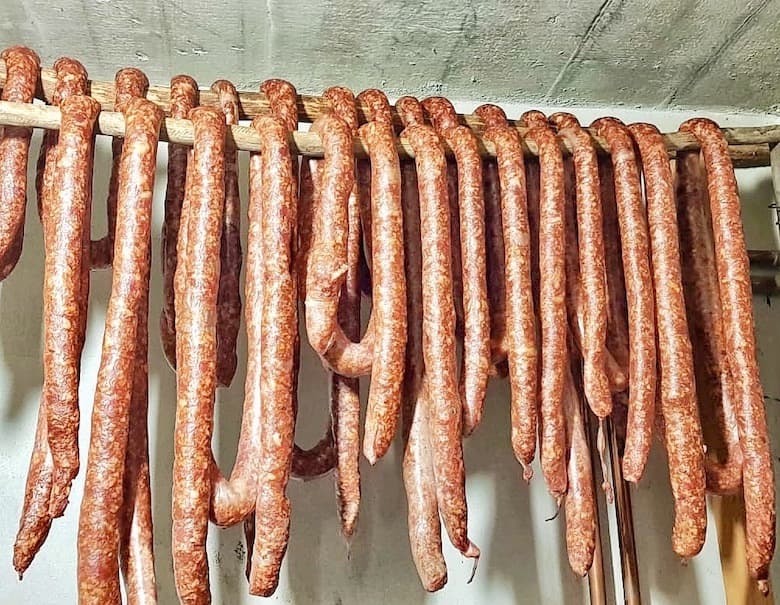 We’re having guests over!

If middle-class Romanians are to have other Romanian guests over to celebrate something – anything, chances are there will be Boeuf Salad. It’s the staple celebratory dish without which no gathering would be considered complete – not to mention a success. Decorated in the most imaginative (and sometimes kitsch) ways with boiled eggs and pickles, it steals the show on any table arrangement. And its story is just as eclectic.

The name “Boeuf” might suggest a French origin, but that’s just because its creator was French. The salad’s true origin, though, is Russian. A few centuries ago, when the Russian aristocrats only hired french chefs, Chef Lucien Olivier opened the restaurant Hérmitage in the heart of Moscow. Here, he put together a delicious menu that included a precursor of today’s salad. It included beef (boeuf) and a decadent amount of mayo. To cut from the heaviness of the dish, pickles and other legumes and vegetables were incorporated as decoration elements.

The salad lived on in Russia under the name Salad Olivier. In Romania, after a few adjustments, it became Boeuf Salad and never left our tables. 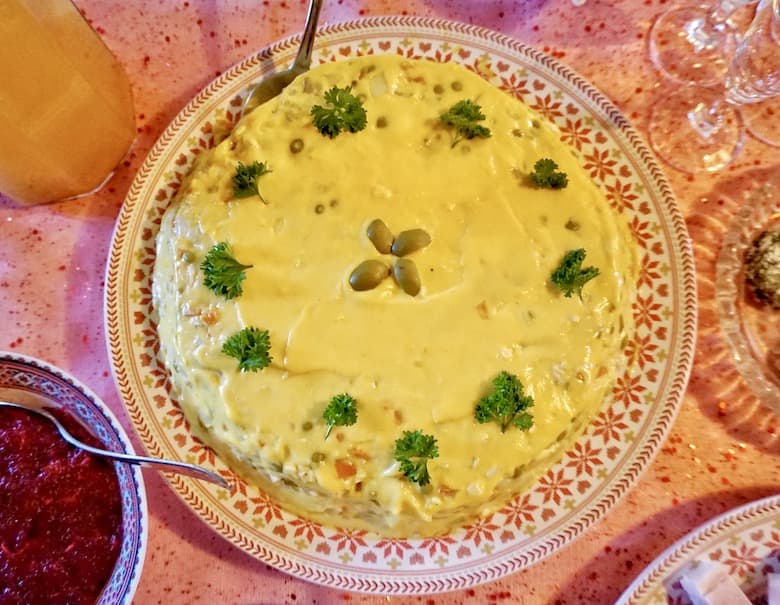 If the weekend comes and the weather’s nice, the Romanian middle-class family living in the city will wake up with a sole thought in mind: “what a great time for a barbecue!” They’ll gather the family, call some close friends and take their carry-on grill to hit the barbecue grounds.

Romanians are big fans of going out to the outskirts of the city for barbecues. Several green areas are dedicated to this weekend hobby. With the cars parked as close to the grill as possible (for increased efficiency) and foldable tables and chairs set out for a lovely family lunch, Romanians will spend the day barbecuing and chatting. The kids will run around and play catch or, if those from the modern breed will stay tied to their phones fearing the great offline will disconnect them. 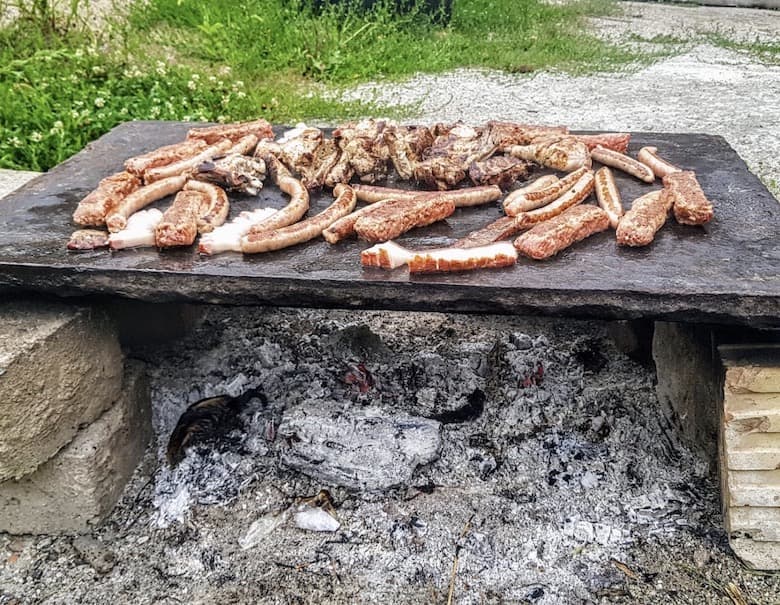 “Our kid went to college”

Lore has it that a Romanian mother’s love can be measured by the number of jars of zacuscă she ships to her kids in college. Mothers from all over the country spend autumn after autumn chopping vegetables, stirring pots, and closing lids with Herculean power. Boiled inside the jars is all their care, love and anxiety that their kids will starve to death (they probably refuse to believe that there’s food outside their kitchens).

Mothers know that delivery companies are not to be trusted. These delivery men don’t “handle with care” and if they say they do, it’s a lie, mothers know. So, instead, they turn to the trusted railway company that undertakes, unofficially, the job of feeding students from across the country. The train conductor is usually the one who, in exchange of a small token of appreciation, safe-guards the bag of jars for the duration of the trip. Once at the destination, tens of students wait for him to give each their share. This whole operation is, of course, performed under the radar and you might as well call it zacuscă bootlegging. 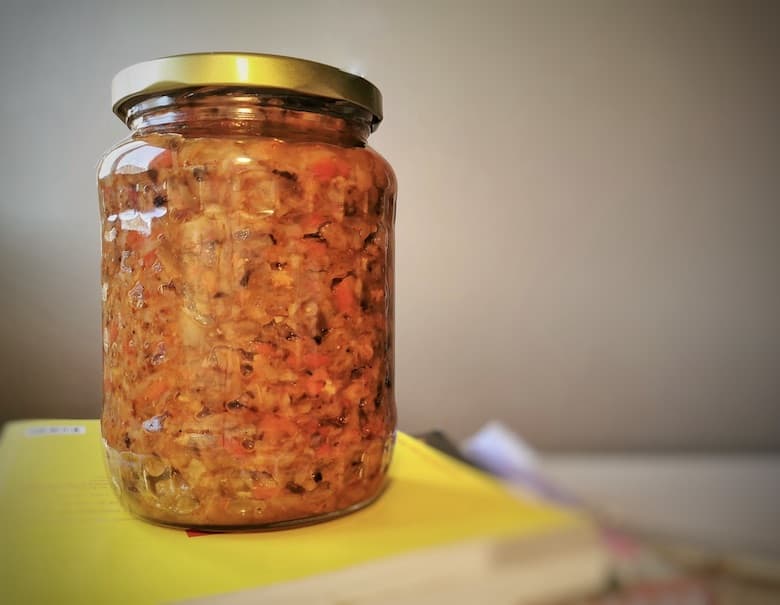 Now, you might say that this is not food. And you’d anger the spirits. For Romanians, pălincă is just as important and it can be a great breakfast, lunch, snack or dinner. It can be served cold or mulled, with spices or without, from one shot or from countless sips. It’s believed to be the best cure for a cold and a great treatment for any heart-ache. Of course, all drunk in reasonable quantities and small cups. 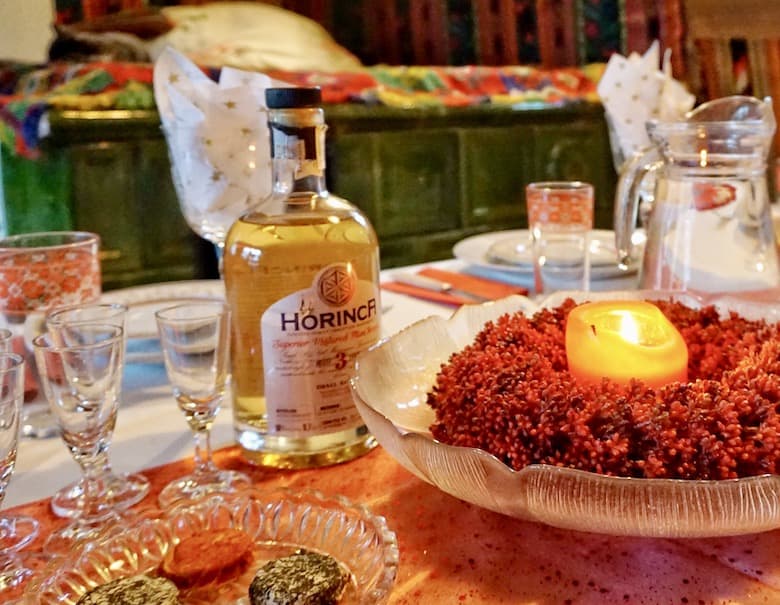 Give Romanian Food a Bite (or more)

Our foods tell our story better than we could articulate it ourselves. Sure, it might not be to everyone’s taste. Sometimes, we might crave something else as well. But it’s organic, it’s rich, it’s strong, it’s complex through its simplicity and it keeps us full of awareness regarding who we are and what we could be. Now, we know you’re not travelling to find the answers to the deep questions of life, but it can’t hurt if you stumble upon some philosophical delights, right? Or at least some very delicious dishes.

In this story, we’ve recounted just a few of the many, many, many traditional foods that make our cuisine. If you want to know more about us, Romanians, as we were and as we are, join our Social Dinner and let’s talk about everything and anything over a glass of another brew we, Romanians, love: wine. 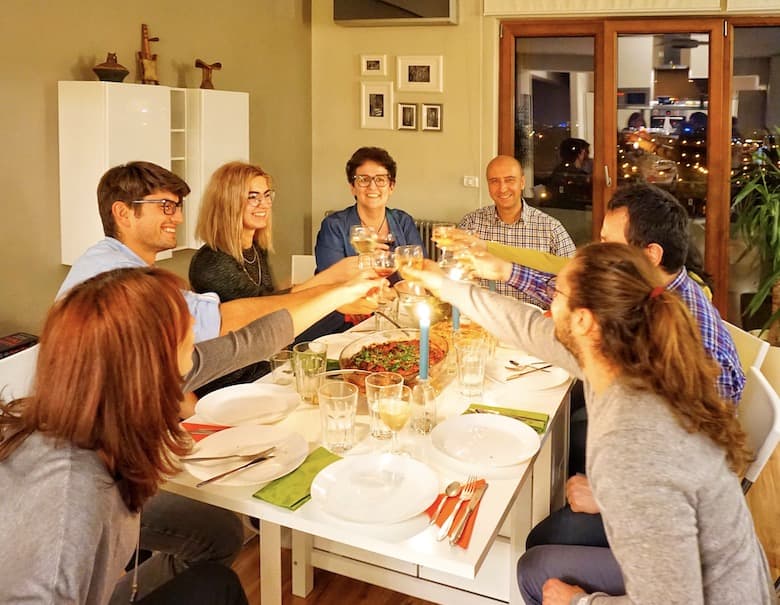 by Ilona Iftode, live from the kitchen

A midwinter’s social dinner in Bucharest

The Artist: A Gourmet Experience