The Story of Saint Nicholas in Romania

Few Romanian folklore characters are so loved and yet so dreaded as Saint Nicholas. Promising a bundle of gifts to kids who didn’t say ‘nay’ to their parents and a nasty wooden whip to those who’ve said it one too many times, Saint Nicholas transforms the night of December the 5th into a suspenseful wait. But make no mistake about it. Even if nowadays people tend to focus on the gifts — or lack thereof — the story of Saint Nicholas in Romania is filled with rituals, myths and traditions.

Who is, actually, Saint Nicholas? How do Romanians prepare for St. Nicholas’ Eve and the D-Day itself? What are the most common rituals and traditions associated with this day? Why is St. Nicholas often considered Santa Claus? How does he know who’s been naughty or nice? Why does he gift wooden whips? Why?! We’ll try to answer all these questions and more, so prepare your boots and let’s go! We mean, let’s read!

Who is Saint Nicholas?

Born around the end of the 200s in Patara, Lycia, present-day Turkey, Saint Nicholas is said to have had a life devoted to doing good and protecting those in need. Legendary elaborations put him at the centre of several Samaritan deeds. The most famous of all is the story of how he became Saint Nicholas we celebrate today.

The folk tale has it that Saint Nicholas helped a father in despair who was ready to sell his three girls into servitude because he couldn’t pay for their dowries. For three nights in a row, Saint Nicholas secretly dropped a sack of gold down the chimney of their house. On the third night, the father caught a glimpse of Saint Nicholas and that’s how we’re now able to tell the tale. Although this account sheds some light on why nowadays we perceive Saint Nicholas as a gift-giver, it’s still a few steps down the road from the mythical Romanian figure that brings sweets to sweet kids and wooden whips to naughty spoiled rascals. 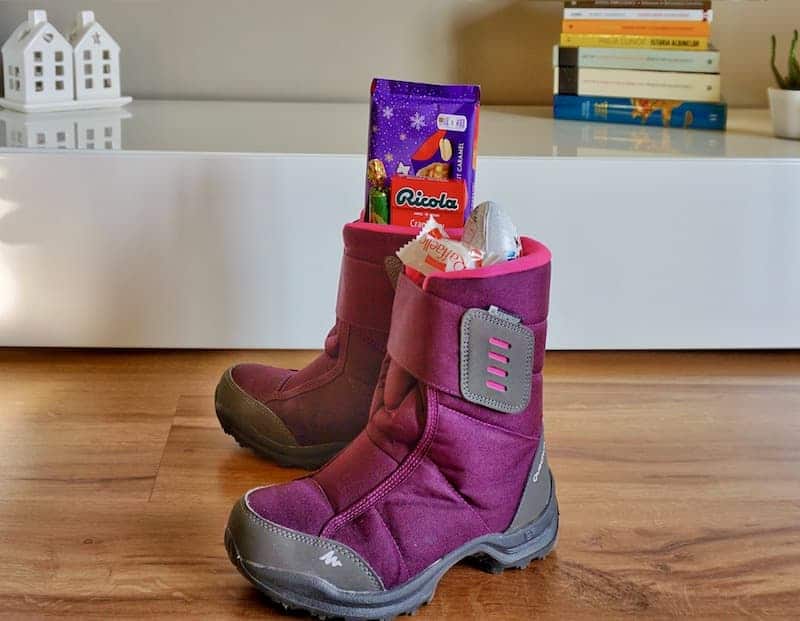 In fact, the actual story of Saint Nicholas has many blanks and few certainties. What we know for sure is that he was the Christian bishop of the city of Myra in Asia Minor during the Roman Empire. The saint did have a pious life and died on December the 6th, which is why we celebrate him on this day. His relics, which can be found in Bari, Italy, are said to weep a miraculous substance but this, again, is part myth, part reality.

In Romania, Saint Nicholas is known as Sfantul Nicolae or, in some regions, as Sfantul Nicoara. While different Romanians call him by different names, they all shine their boots and line them up for Saint Nicholas’ Eve, on the 5th of December. In the morning, Romanians, especially children, will wake up to find their prepped shoes filled with sweets, fruits and other gifts — if they’ve been nice, of course. Those who’ve walked on the wild side can expect to receive something closer to a warning sign than a gift — yes, the dreaded wooden whip. 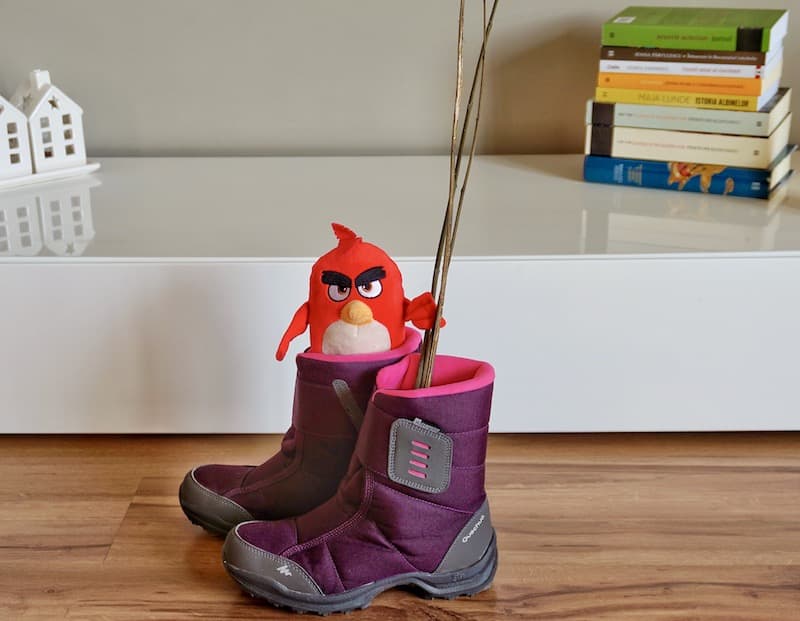 You see, Saint Nicholas isn’t a holiday you should only be preparing for a day or two in advance. Actually, the entire year boils down to this day, when a resolution arises as to whether Romanians have acted according to shared values and norms or have strayed from the right path.

Gifts aside, there are other traditions and rituals Romanians engage in on Saint Nicholas’ Day (maybe to avoid thinking about the dreaded wooden whip, but we’re just speculating now). In some regions of the country people bring twigs into their houses and place them under an icon in the hope that they’ll bloom until New Year’s Day, inviting luck and prosperity into the upcoming year.

The story of Saint Nicholas in Romania paints him on a white horse, announcing the coming of winter. Galloping, he sneak peeks inside the house of each Romanian and just from this glimpse, he knows: naughty or nice. Kids who want to win him over try one last trick and leave carrots at the door for the Saint’s horse.

Romanians also make the most of Saint Nicholas’ Day to rehearse their carols for Christmas. This tradition is mostly followed in villages where young men gather and designate a household to host them.

Santa Claus, is that you?

During his lifetime, Saint Nicholas rises to fame as a fierce defender of the Church and a protector of those in need, giving birth to myths and legends and miracles and tales and whatnot. Thus, he later became the absolute bringer of gifts. However, after the Protestant Reformation in the 1500s, Saint Nicholas was forgotten. But people still wanted gifts and who can blame them? Thus, the gift receiving was moved closer to the birth of Christ, leaving only one question unanswered: who would bring them? Jesus was definitely a great contender, but just how many gifts a newborn could bring?

People started inventing several characters, most of them scarier than need. For example Ru-klaus, a threatening sidekick, brought German kids their gifts and countless chills on the side, as he promised to kidnap those who didn’t listen (yes, the legend escalated quickly). In The Netherlands, Saint Nicholas was reinterpreted as a less threatening character named Sinterklaas. A few more centuries had to pass until writers and poets would transform Christmas into Santa Claus holiday focused on family time. But they did it!

The story of Saint Nicholas in Romania shifts the narrative, because they’re the kind who want to have their cake and eat it, too. So they’ve kept both Saint Nicholas and Santa Claus. Having twice the amount of presents can never be a bad thing, except if you’ve been naughty, because then you know what’s coming…twice! During communism and early democratic times, these holidays were among the few times bananas and oranges were found in stores. The smell of freshly opened oranges is still deeply associated with those times. 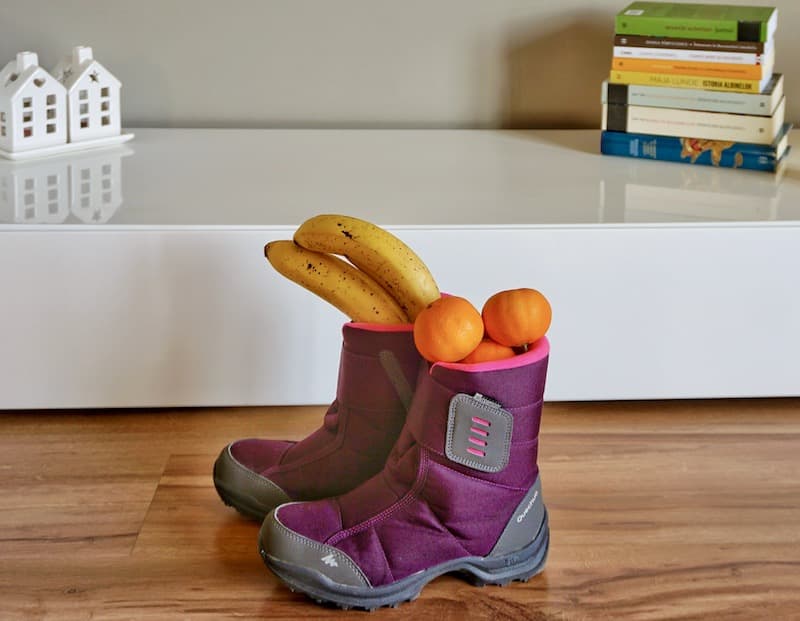 These boots were made for receiving gifts

Whether you’ve been naughty or nice, visiting Romania on Saint Nicholas’ Day will surprise you with a gift. Will it be something for your sweet tooth or something to scold you for the restless year behind? There’s only one way to find out and we hope that you’re already searching for flights. And, of course, that you’re cleaning your boots.

>> And if you need inspiration, do check out this 10-day itinerary across Romania <<

Romania Private Tours can help you — not with cleaning your boots — but with designing a bespoke itinerary to Romania that will immerse you in the traditions of Saint Nicholas’ Day. If you want to make the most of your Romanian tour, think about an extended holiday that spans until Christmas. Remember, if you’ve been nice, that would mean double the gifts. Not to mention that when it comes to Christmas, Romanians have dozens of rituals that will make you fall in love with the authentic, mythical spirit of Eastern Europe.

Now, excuse us, we must do some more good deeds, just in case Saint Nicholas is glimpsing through our window!

by Ilona Iftode, with sugary treats and no whips!

Romanians speak food Here’s a bite of our story