Dracula’s Castle: Discovering the Story Behind the Myth

Dracula’s Castle in Transylvania is Romania’s most famous and notorious attraction. Ask anybody and, even if they won’t have a clue as to where Romania is, they will instinctively let you know that it’s the birthplace (and lurid playground) of Count Dracula. The count himself doesn’t own a passport, but his legend has travelled all around the world. Now, it’s time for you to travel to the magical place that has sparked the imagination of so many and sent countless chills down their spine.

To stay out of harm’s way, we’ll tell you everything there is to know about Dracula’s Castle, Transylvania and the count himself, adding a pinch of real facts to the myth. Together, we’ll understand better Dracula’s Castle by discovering the story behind the myth. In case you’re a bit worried, don’t be. We’ll reveal the lethal weapon that can instantly save you from the most famous Romanian vampire. Spoiler alert: it’s a garlicky affair!

Unravelling the myth of Dracula’s Castle

Like most places in Romania, Dracula’s Castle is a place of myth, magic and grisly legends. However, it’s mostly a place imagined by Bram Stoker, who needed a mystical setting for his Dracula character.

Transylvania — filled with popular beliefs about vampires and surrounded by dark forests— seemed perfect, and the Bran Castle presented an excellent starting point. So, Bram Stoker described a castle perched on a steep hill, with a river washing the valley below. Then, inspired by the prevailing supernatural folklore in the region, he masterfully connected countless scattered legends into one single coherent narrative. 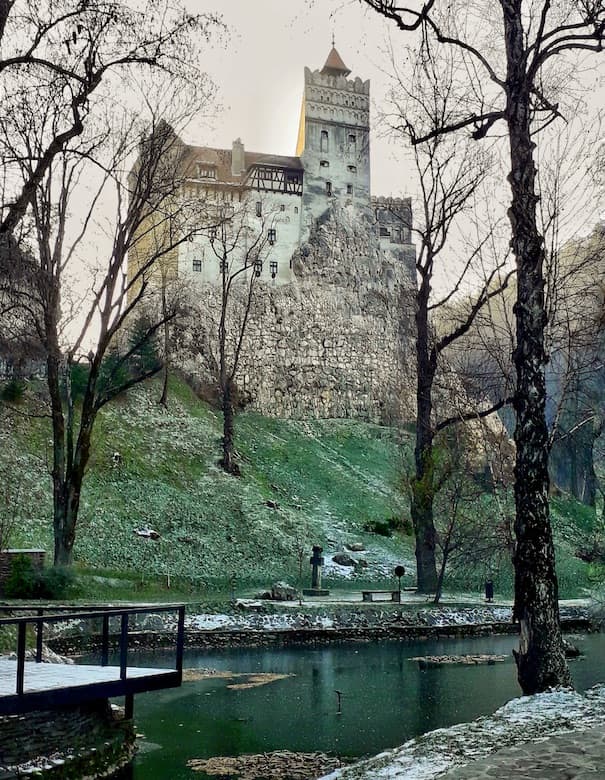 For his main character, the author turned to Vlad the Impaler, a Wallachian ruler whom many historians describe as the cruellest, most merciless voievod ever to exist. Vlad the Impaler’s thirst for blood resembled Dracula’s insatiable appetite. Thus, Bram Stoker derived the name of the ruler’s — order of the Dragon— and the surname of his father —Dracul— and came up with the name “Dracula”.

With all the essential elements in place, Bram Stoker built the infamous Dracula character. The author placed the action of his book, at least in the collective imagination, at Bran Castle, where countless travellers are still looking for the bloodthirsty count.

As the story goes, Dracula was (or better said, still is) a centuries – old vampire and, what do you know, a Transylvanian nobleman. Proud of his boyar heritage, Dracula spends most of his days well… sleeping because a vampire can’t reveal himself into daylight. However, when night falls, Dracula’s real character comes to light, and the hunt for human blood begins.

Despite everyone’s search for Dracula’s myth in real life, the facts are far from the fiction, even though they are equally intriguing.

Bran Castle is, indeed, a stunning fortress set in a magically daunting location. Deep in the heart of the Carpathian forests and atop an imposing hill, the 13th-century medieval castle is, indeed, hauntingly beautiful. However, no vampire has ever set foot in it. Instead, it has hosted over almost a millennia: knights, kings, soldiers, storytellers, Vice-Voivodes, Romanian princes —such as Mircea cel Batran and Iancu de Hunedoara. The most famous resident was  Queen Marie of Romania, who refurbished Bran Castle and used it as a royal residence in the 20th century. Queen Marie of Romania was the very opposite of what Dracula represents. For everybody, she was “the great queen who (…) spreads her blessing everywhere she walked, thus winning, with irresistible momentum, the hearts of the entire country’s population”. This is how she was described in the document that designated her as the new owner of Bran Castle.

Born in 1431, Vlad the Impaler, the allegedly real-life Count Dracula, never resided at Bran Castle. In fact, his connections with Transylvania are scant. Okay, truth be told, Vlad the Impaler never even set foot in Transylvania. But things do get interesting, as you might have suspected from the name “Impaler”.

Also known as Vlad III or Vlad Tepes, Vlad the Impaler has his own set of well-established lurid legends. While it’s true that he was crueller than most, depictions of him are a bit on the exaggeration side. Folk tales have it that his fairness (or madness) often drove him to impale enemies and display them for all to see.

One of the most famous and gruesome legends accounts for a banquet held by Vlad the Impaler. He invited all the boyards from Wallachia in an attempt to settle down the conflicts among them. Seeing that he couldn’t and afraid they would challenge his authority, he decided to stab them instead. Afterwards, he impaled their still-living bodies on spikes. Of course, the authenticity of this story is highly debatable. It is, most probably, nothing more than a horror folk tale.

Pack all the garlic you can get through customs and come to Transylvania to meet the legend of Dracula. Chances are you won’t find him at the Bran Castle since he prefers his fictitious residence at Dracula’s Castle. However, you’ll be charmed by the vampireless Bran fortress nonetheless. The medieval castle has recently been refurbished, and the tales it tells are more vivid than ever.

If the atmosphere becomes a bit too real for you, leave the foggy fortress behind and head to Brasov. With mountains that open countless hiking trails for every type of traveller, the city of Brasov is a quintessential stop in Transylvania.

Next, to get even farther away from Dracula, take the world’s best road according to Top Gear: the Transfagarasan. Better than a roller coaster ride, the highway will swirl your senses into falling in love with Romanian sights. Plus, the Transfagarasan will also get you to Sibiu— another charming Romanian city, further on to Sighisoara — a medieval town with an undeniable charm and even to the Turda Salt Mine— the world’s deepest underground amusement park.

Transylvania is a world well-worth exploring beyond the myth of Dracula. Packed with castles, citadels and iconic churches, it also delves in myths and “strigoi” (a type of Romanian ghost) that are sometimes even scarier than the fanged count.

Romania Private Tours can help you create an itinerary with just the right amount of spooks, vampires and cultural attractions. We’ll take you on a wild ride to Transylvania that will follow Dracula’s steps in search of ghosts from the past and face reality at Bran’s Castle. Together we’ll explore the Dracula’s Castle by discovering the story behind the myth. Swinging between fact and fiction, we’ll enjoy the beauty of Romania’s rich cultural background and its unending collection of folk stories.

Now, if you’ll excuse us, we have an appointment with Dracula himself.

Best Things To Do, See and Eat in Cluj