One of the most beloved Romanian poets said that “Eternity was born in the countryside“. That here, thoughts rise slower, and not because they don’t run deep, but on the contrary. In the Romanian village, the hearts of people beat, but also with the pulses of their land. I deeply agree. As I leave behind the asphalt road and on the bumpy, dusty path that leads to my grandparent’s secluded village, I feel like I’m leaving a world for another. The humdrum is quieted, and every sound becomes relevant. I listen, I see, I breathe, I choose my words more wisely. When there’s less of anything, everything becomes meaningful.

Running around in big cities gets most of us nowhere. We heavy-lift projects at our demanding jobs, we speed up through multiple tasks, we sprint to get to the deadline, but at the end of the day, we feel like Sisyphus – without his mythical fame. We ache to slow down, and we read “Hygge” and “In praise of slow”. We get a picture of how slowing down can help us to do more of what’s really important. But to succeed, we need an environment that can nurture all these “tactics”. Well, what do you know, Romanians have been living slow and mindfully for all their history.

I stop in front of my grandparent’s house, and I see my grandmother opening the door unhurried. She paces herself, carefully, to the gate. She heard a car and came out to see who could it possibly be. 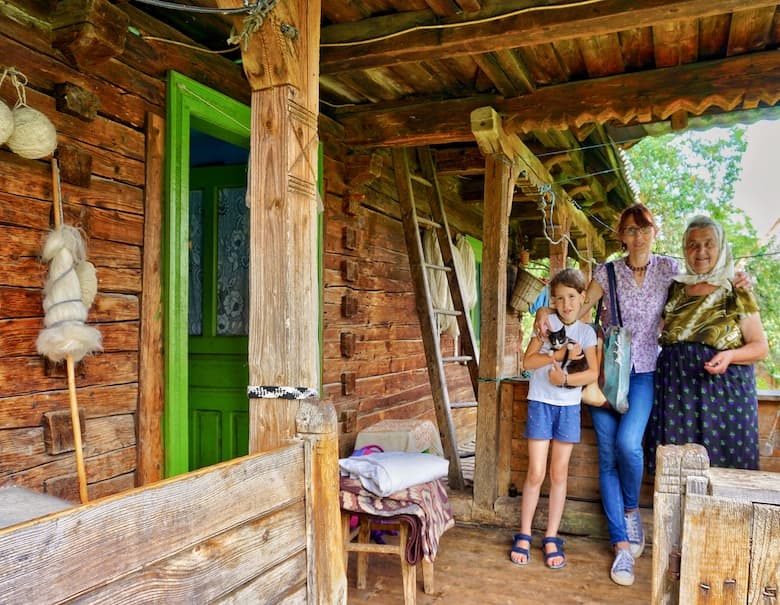 Where no Land Rover has ever been

Away from relentless and unforgiving car horns, silence blooms atop hills. Here, no road has ever dared to go, fearing to cross nature’s way, literally and metaphorically. The secluded Romanian village’s endless serenity might own its reign to the total lack of cars. After all, not even the most performant 4X4 has the torque to reach these. But it might also have something to do with the ability of countryside Romanians to live life at fewer kilometres per hour. 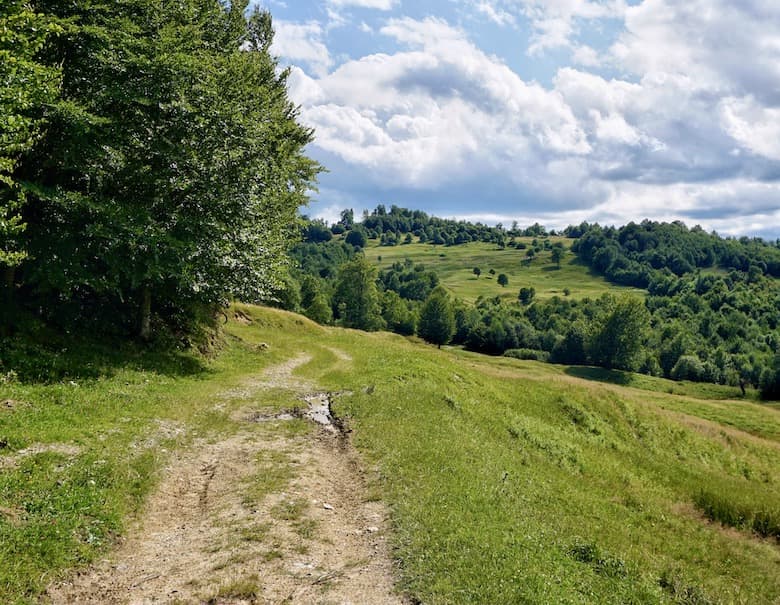 In villages like Inelet or Scarisoara, and countless others around Romania, access requires determination and, dare to say, a reasonably good physical condition. Not even the most intense Yoga sessions and gruesome HIIT classes can challenge the stamina of Romanian villagers trained on the paths between their village and the world. Reaching Scarisoara, for example, requires traversing narrow, wild roads and climbing countless pairs of wooden stairs. The journey, however, is well worth it, especially since it invites inner-reflection, throwing hurry down the stairs. In fact, slowing down is mandatory, for safety reasons and not only. As one crosses from the world-of-rapidity into the world-of-slow, the immersion in the scenery of untamed beauty that flushes fresh air into otherwise busy minds is invigorating. 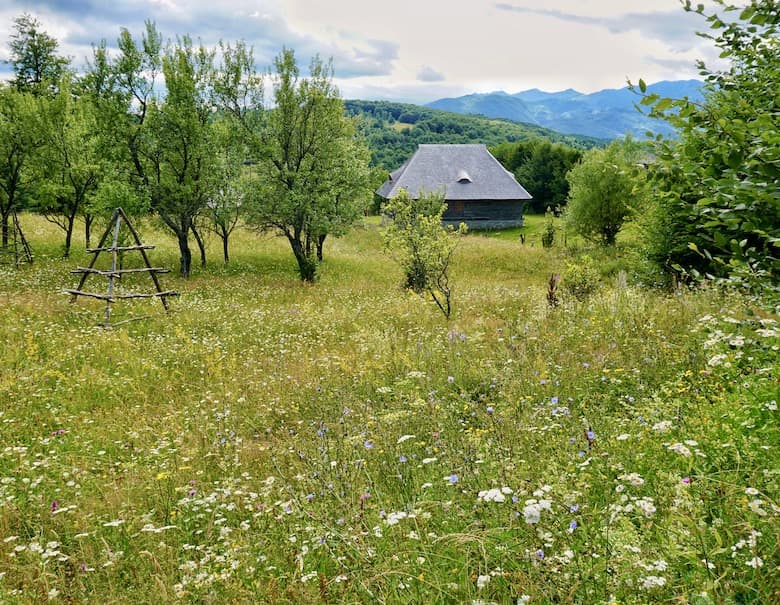 Slow boiling berries on the stove

Romanian countryside people don’t let their blood boil when heated by stress. They face the hardships of everyday life with calm, resilience and grit, venting off pressure by slow cooking delicious, nurturing soul food. Villagers are renowned for growing their own ingredients and turning them into humble, yet delicious meals.

We, Romanians, have a tendency of laughing in the face of misfortune (a face haz de necaz). So, we sweeten our lives with the sweets of the land, making “sour” taste like a treat. Homemade jams are the most excellent remedy of all, curing not only sweet tooth cravings but also heartaches and childhood nostalgia. 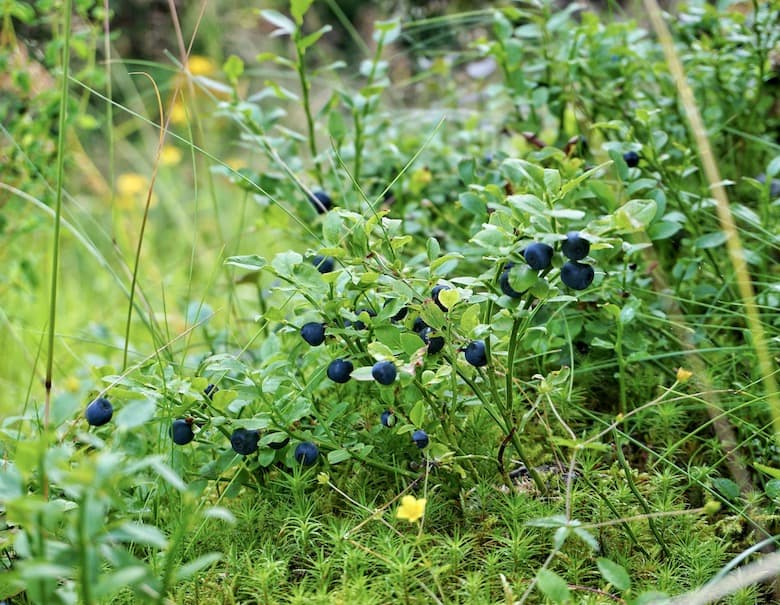 Fresh forest berries, scented strawberries, deep-ruby-red raspberries, plums, apples, pears, green walnuts and even roses are patiently enchanted by skilled hands over the stove and slowly transformed into jelly happiness. The jams are popped open whenever a grandma makes scovergi (fried dough). Or when there’s a naked piece of homemade bread laying around, just begging to be dressed in something decadent.

By taking the time to boil their own jams, Romanians are performing the same type of therapy, slow living believers promote with all their might. 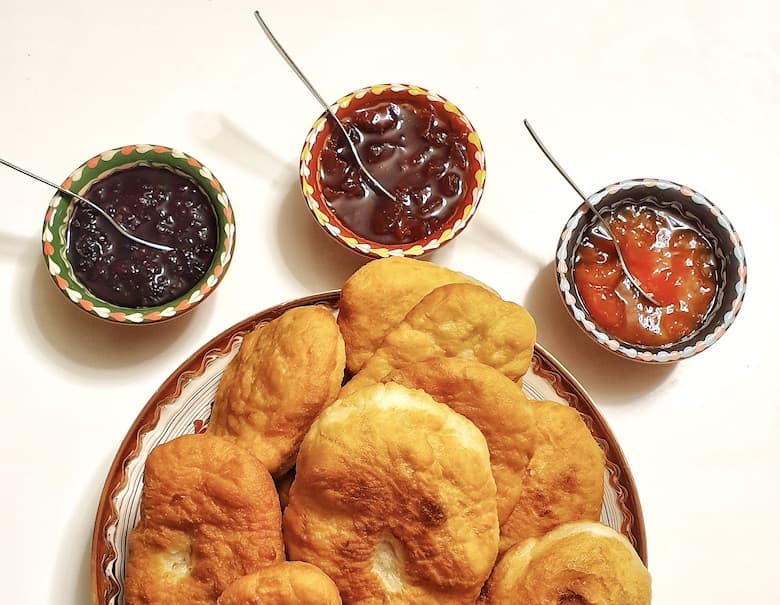 Shepherding is an intimate part of Romania’s identity, representing a way of life that bows to the pace of nature. Caring for sheep herds means descending to the greenest open fields as the weather turns the hill-top meadows mellow. This nomadic journey, known as transhumance, is embedded in our national conscience. In return, nature rewards us with a bountiful stock of meat, milk and fluffs of high-quality wool. 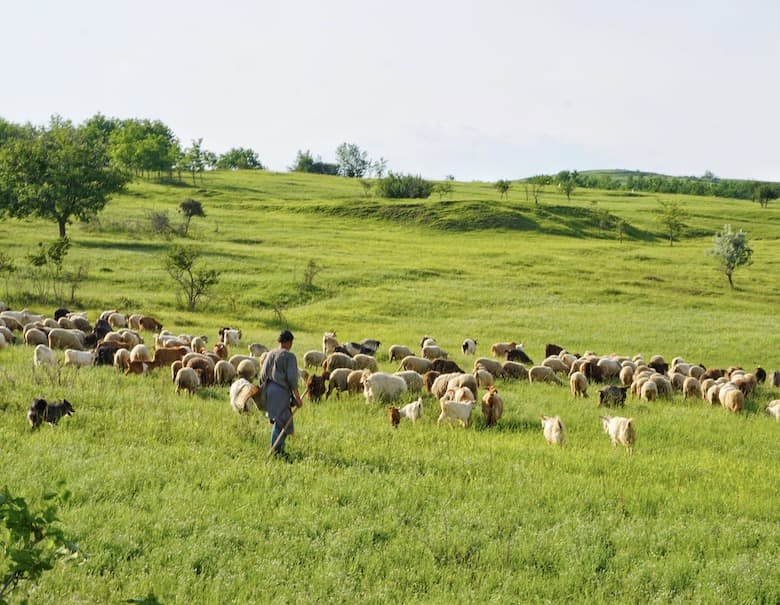 As you cross Romania during the summer, you’ll see the gentle hills flocked with the white “fluff”, carried with pride by plump sheep. If you make the inspired decision of stopping by any good Romanian’s household, you’ll see the same white “fluff” skillfully knitted with long needles by masterful women. Socks, gloves, vests, hats, sweaters, scarves and whatnot are crafted by these pastoral designers at an unbelievable rapid pace. In the heat of summer, these cosy pieces of garments might seem like a bit hasty, but taking it slow means also seeing ahead. And it’s winter they have in mind. Plus, it’s a highly therapeutic hobby. 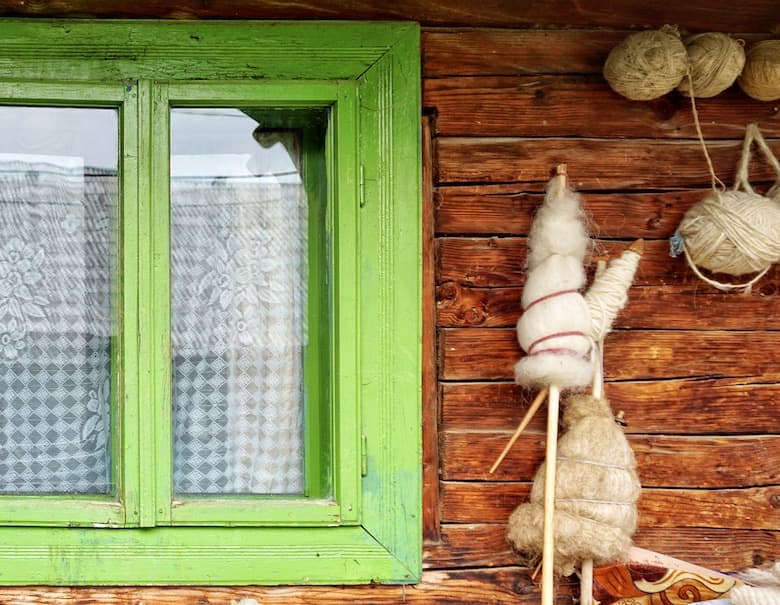 Sticks and stones. Work and play.

Lego, World of Warcraft, AR and VR, modern kids play in a digital world where the possibilities seem endless. Countryside Romanian kids play outdoors, in the natural world where their imagination makes everything possible. They run outside playing catch, hit the hills to explore and turn every object into a toy.

>>12 Reasons to visit Romania with children <<

When the play’s over, the same sticks become their work tools, as they lead the cows to the fields. Play becomes work, but there’s still room to fool around, as long as they keep an eye on the herd. Out in the open, kids sing their hearts out and take on invisible monsters that try to attack their cows. 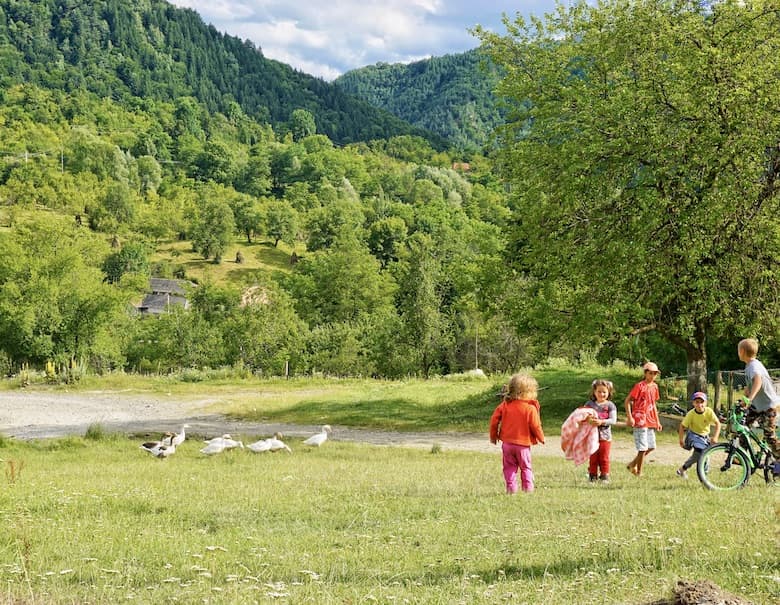 Watching the clouds pass by

The saying “romanul s-a nascut poet” (the Romanian was born a poet), is a bitter-sweet adage. Our lyrical inspiration comes from an intrinsic nostalgia combined with surrender in front of our sometimes implacable faith. However, the rhymes are also stirred up by nature and the courage to stay still and simply surrender to its grandeur.

Just watching the clouds go by definitely sounds like a heresy to the busy 21st century professional. There are so many things to do, places to go, people to meet! But countryside Romanians respond: “Where’s the rush? We all end up in the same place, after all. So might as well rest your bones.”

With no clear line between their houses and nature, stopping to tune in to the rhythm of the world seems like the right thing to do. In a moving meditation, the Romanian villager forgets his worries to aim to the sky – the place where all his superstitions, beliefs and hopes live. It’s a slowing-down that’s contagious and healing. It soothes the big-city-rush and proves that life amounts to more than the number of things one manages to squeeze in a mere day. 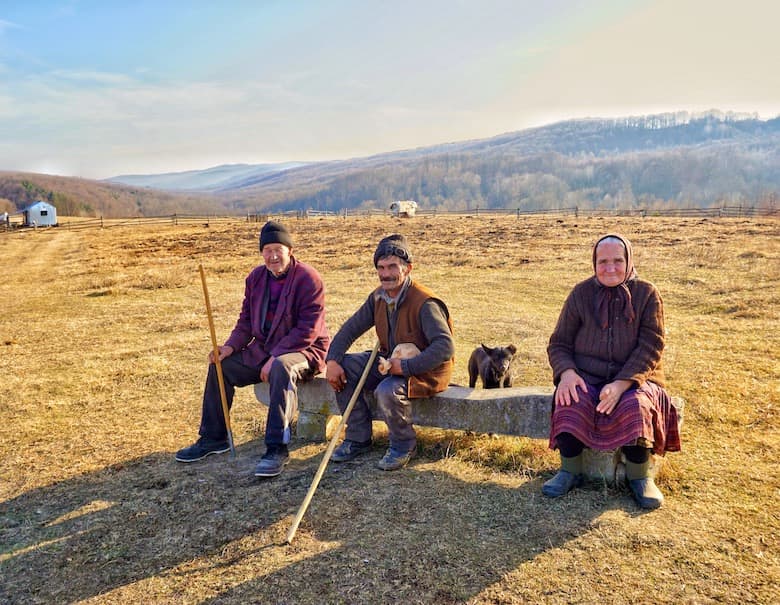 Storytelling in the middle of the road

With the risk of bragging, Romanians were not only born poets, but also storytellers. Maybe it’s their keen spirit of observation (or the desire to stick their nose in their neighbour’s business). Or perhaps it’s their humour (sometimes dark and twisted). Or maybe their patience (and eagerness) to tell a story that paints the whole picture. No matter the reason for this God-sent gift, it helps countryside Romanians keep a constant stream of news through a live-feed, without any social media.

The stories they tell are for the ages. While some knit narratives about the present (who with whom and what and why), others share mythical stories, legends, superstitions and the real-life drama of their life. Talking to the wisest in the village, usually considered to be the oldest, will take you down a path of memories and right into the heart of Romania – a bit bruised, but beating fast and with courage. Listening to these stories, which can go on for hours, you’ll feel time slow down and the heavy-burden of “what’s next” vanish, as you’ll hold on to every word. 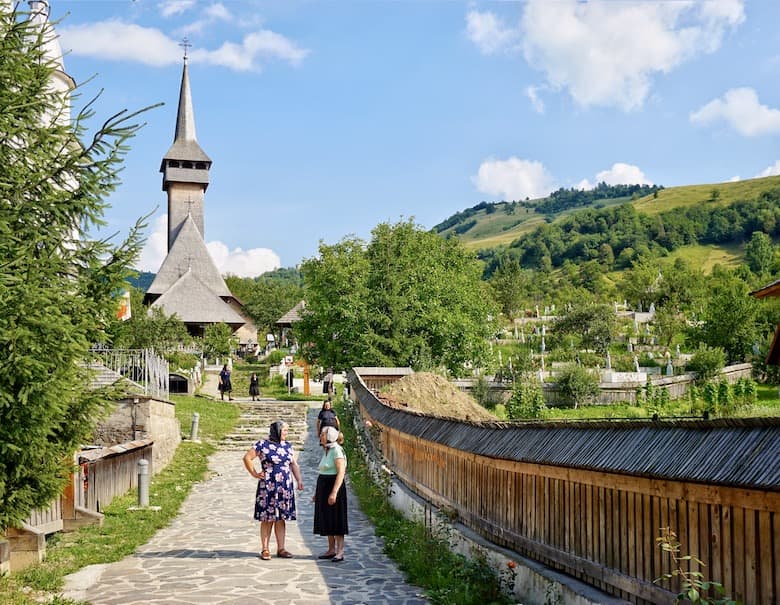 Shut down with the hens

Unplug – the number one tip on any “slow living” to-do list. Get more sleep – another vital recommendation for a better life. Become a morning person – the world’s most successful CEOs wake up at 5am, they say.

Countryside Romanians haven’t read the latest edition of The New Yorker or watched the newest TED Talk. Still, somehow they managed to figure out these benefits from themselves, simply by tuning in to nature’s way (although the lack of electricity a while back did reinforce the habit, to be frank).

In Romania, hard-working countryside people wake up when the rooster sings and go to sleep when the last hen does. It’s their natural clock, and they abide by it without hesitation, even if, contrary to popular belief, they also have modern watches. Countryside Romanians know that getting a good night’s sleep will help them do more tomorrow, even if there’s still plenty on their mind today. But all things in their due time, the hard-working man thinks. And, so far, it has proven to be a quite healthy and fruitful mentality. 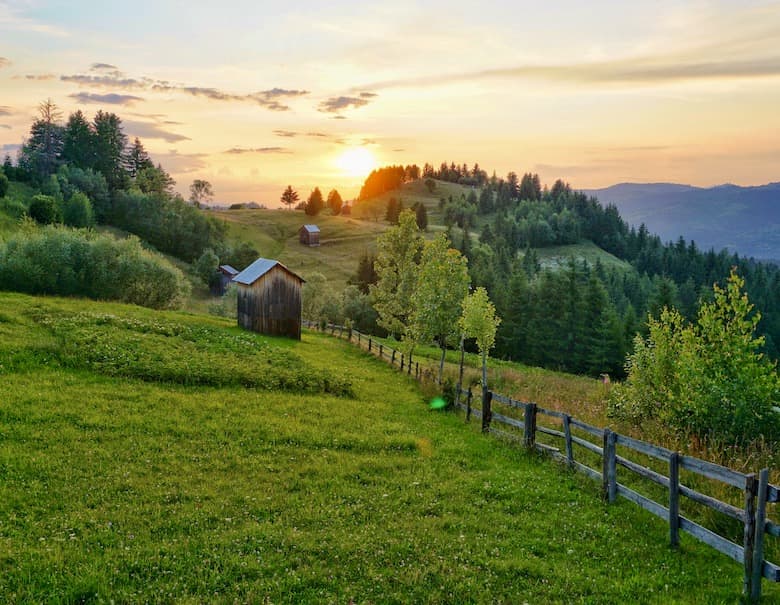 There’s no rush for you to book a ticket to Romania, take your time. We’ll be patiently waiting for your arrival, maybe we’ll even knit some socks in the meantime. When you do get here, we’ll take you on the slow journey to discover the most pleasurable and meaningful things in life, as seen by countryside Romanians. However, don’t postpone indefinitely. As they say, the days are long, but the years are short. See you slowly (but surely)! 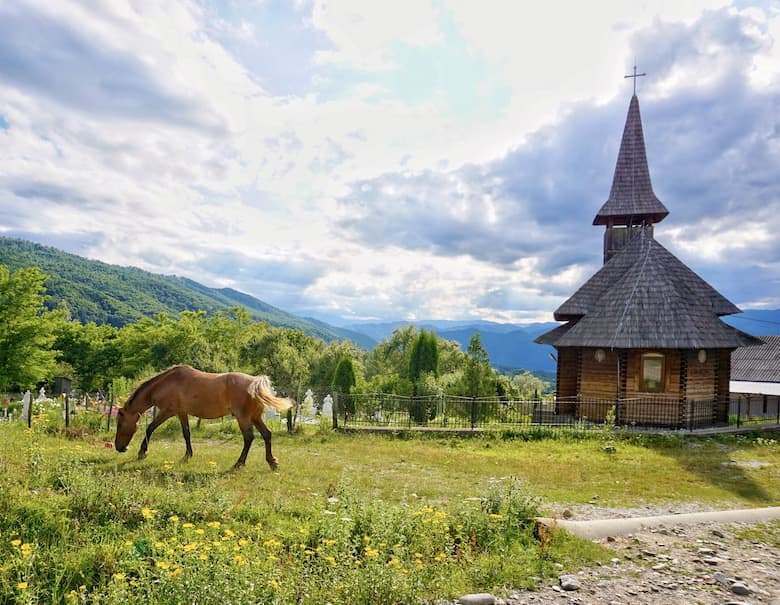 The Story of Saint Nicholas in Romania